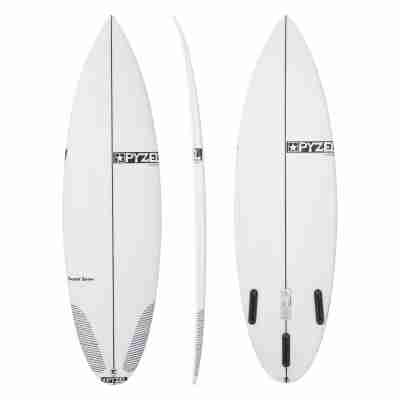 Browse all Super Grom Surfboard reviews completed by the global Boardcave community. Gather unique surfboard model insights and feedback, while learning more about the Pyzel Super Grom. Watch and read Super Grom reviews from surfers with the same rider profile as you, filter results to a similar, weight, ability, fitness and volume to help you compare and buy your next board. Our unbiased reviews are used by shapers, surfers and the global surfing community to learn, advance and refine all round surfboard design.

I surfed this board in Lakey peak and it went ok in the heavy surf. the thing that bothered me the most was that it had so much rocker and it was hard to paddle and didn't go to fast on waves. however it had so much pop and even with little speed I could launch off the lip and its stability due to the width let me land a couple of rotations. I surfed with the old Kelly Slater 2.0 fins by FCS and the suited it well but the when I turned to small accelerators, they super charged the board and I could push so hard on them. due to the loaded rocker I could fit the board in the pocket and set the rail really nicely to do super tight fast turns. in fact that's what I liked so much about the board. I could transition rail to rail so quickly and the board let me hold rail as well. A very lively board suited to good waves and I really enjoyed surfing it.