Everything You Need to Know

The passionate lifestyles of skateboarding and surfing are, and really always have been, very much intertwined. After all, skateboarding is a manifestation of the surf community’s desire to translate the feeling of riding a wave onto the concrete jungle. And although skating has taken off in terms of progressiveness, there's no better way to attain that alluring feeling of carving down a wave face than with the innovative surfskate.

Surfskates are simply rad, and they're becoming increasingly popular due to their ability to mimic this surfing-like feeling on the land perfectly; a way to both improve the fundamentals of your surfing while keeping you occupied during those bummer flat spells.

A surfskate skateboard is an essential board to any surfer’s quiver, and we're here to show ya why! 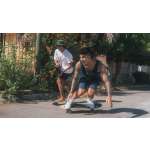 What Exactly is a Surfskate?

A surfskate is a particular type of skateboard that isn't meant for kickflips and nine stairs, and instead, its sole purpose is to mimic surfing-like movements and sensations as you cruise along.

A surfskate will feature a type of reverse kingpin, swivel truck on the front end of the board. This truck technology creates the unique ability of the board to pivot on extremely tight radiuses and turn with a motion that is oh-so-similar to carving and pumping down the line of a peeling wave.

As the rider pumps and uses their toe/heel edges to initiate turns, the board's nose has free range to aggressively lean from rail to rail, just like a surfboard digging into a wave face.

Once you get the hang of pumping, you don't even have to put a foot on the ground to push!

The sizing (length) of a surfskate skateboard will vary depending on your body type and preferred riding style. Still, surfskates are generally shorter than a standard longboard skateboard (although they do make large versions of a surfskate) and longer than a street skateboard.

To further promote similarities to surfing, the deck of a surfskate is wide to emulate the feeling of your feet standing on the deck of a surfboard, and they are shaped just like the most popular styles of surfboards: pintails, swallowtails, squaretails. You name it!

The wheels of a surfskate are similar to the freeride wheel style of a longboard, just a tad bit smaller, and combine the perfect amount of grip-to-slide ratio. Just grippy enough to keep you locked in as you pump to generate speed, and just hard enough to allow for the power slides that feel like a big, fins-out hack on a lip. A surf skate wheel should be no longer than 70mm to prevent the dreaded wheel bite as you dig deep into a turn.

So whether you want to practice your bottom turns, dial in your hacks, or work on generating speed while simply having a joy of a time, a surfskate skateboard has all the boxes checked. 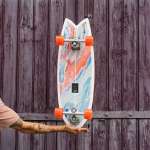 Longboards do indeed allow for long, drawn-out styles of carves, but they don't get close to the shreddable manoeuvrability of a surfskate.

The degree of angles that you can lean into with a surfskate from the toe to the heel edge is far greater than that of a longboard skateboard, and a longboard will require you to push when generating speed on flat land. As well as this, longboards are better suited for extreme downhills where surfskates are not. Essentially, a surfskate will feel a heck of a lot more like surfing than a longboard will.

And when compared to a standard skateboard, there's no popping or flipping with a surfskate. You're not going to be hitting rails, ollieing off curbs, or dropping in halfpipes (although carving a bowl isn't out of the picture), and instead, the focus is to surf the land and perform old-school style bertslides on small, wave-like concrete transitions and flat ground. 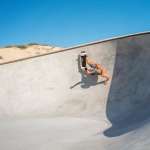 Surfskating has quickly increased in popularity, and with the rising demand for these insanely fun boards, we are now seeing a number of different surfskate brands join the market.

Made in the beautiful, wave-rich Basque Country of Spain, the Yow Surfskate is arguably the best available surfskate on the market.

Let's start with their insanely innovative trucks. After five years of research and design testing, the "Meraki" surfskate system embodies exactly what it feels like to surf the land.

The wave-like sensations created by this truck are accredited to their patented spring system, allowing for easy pumping to generate speed, and an unrestricted, sharp turning radius for killer carves. The effective simplicity of the new Meraki surfskate truck is even lighter than before, and when combined with an admirable amount of stability, is the ticket to improving your surfing on the streets or in a bowl.

For those looking to turn any skateboard or cruiser deck into a surfskate, Yow makes it happen with their V4 Surfskate Truck System. The same surfing feel of the Meraki, but with a design that sits slightly higher and with more of an angle to accommodate any board choice, making it so that you can enjoy a surf skate with any board in a matter of a truck change.

To better complement the surf-like feel, these surfskate decks feature classic surfboard shapes with varying degrees of concaves, rockers, and tail shapes for rail-to-rail motions and the deep carves we love, and with rad, surf-art-inspired designs.

For an avid surfer looking to hone in on their surfing when it's flat, the Yow Surfskate is a more than a solid choice to satisfy and add to their surf training regime, and for those who simply want to carve the streets with surfing style, it doesn't get much better than this. 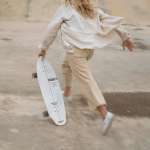 Hailing out of California and inspired by the deeply rooted surf culture, Carver Skateboards is a pioneer of surfskates.

Carver surfskates showcase surfboard-like design to their board shapes paired with their classic C7, CX, and CX mini swivel trucks.

The C7 truck makes for a Carver skateboard that truly embodies surfing the land, and with unique swivel technology, is an excellent choice for beginner and experienced surfers/skateboarders alike.

The CX is a more stable truck style, and although still very much a surfskate, it's a little more similar to a standard longboard and skateboard. The stability and cruising style of the CX will remind you of a longboard, and you can perform more skateboard-like tricks due to this stability. Because of this, the CX Carver skateboard truck is an excellent option for skaters who know what they're doing and who want to add surfing-like flair to their skating. 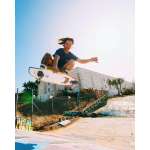 OBfive skateboards have managed to master the fine line of stability matched with a responsive performance with their crazy cool surfskates. These little nuggets absolutely shred, and feel exactly as if you're pumping down the peeling line of your favourite point.

With a surfskate truck design that caters to rail-to-rail movements, you can generate a ton of speed out of these things to release into one big hack. Take em’ from the sidewalk to the bowl and over ramps, the OBfive Surfskate embodies versatility, and will have you eyeing concrete A-frames everywhere you go. 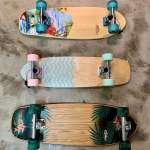 The SwellTech surfskate is another truly innovative version of this board style.

Featuring spring-loaded trucks, SwellTechs are some of the most rippable styles of surfskates to exist. Due to their free range of lateral movement, these trucks can turn completely sideways so that you can whip the board around like your favourite shortboard. So much so that you could change directions in a single turn on a sidewalk.

And with a stable back truck, you can generate some serious speed (more indicative of a longboard) without risking speed wobbles.

With a growing and popular professional team, including the aerial man himself, Filipe Toledo, and some seriously innovative technology, the SmoothStar surfskate makes a solidified spot in the surfskate scene.

Featuring their SmoothStar thruster truck, these surf skateboards promote drive and a loose, free feel to their surfing style that is considered some of the best for surf training. Matched with a more stable back truck, it really does feel like you have fins in the water that help to control and dictate your movements.

We mentioned the killer Yow V4 Surfskate Truck System, so do note that many of these brands sell their trucks freely so that you can adapt different board styles into a surf skate style of board.

A surf skate adapter will make any style of skateboard truck more surflike in its ability to pivot into more defined angles. If you want to add a touch of surfing flair to either a regular longboard or skateboard, then this is the way to go.

Because of wheel bite and other specifics to your board, you may need risers of varying thicknesses or smaller wheels to accommodate the additional size of the surf skate adapter added to the board. 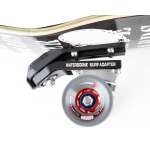 Although surfskates are not classic 'longboards', they do have variations of a surfskate longboard to accommodate noseriding and a more mellow approach to riding this board style.

If you're looking to get a cross-step or two in on your board in conjunction with bottom turns and draw-out carves, then you're going to want a surfskate that is in the 36-42" (91-106 cm) in range. Or, you can add a surf skate adapter to your standard longboard.

For those who want to whip it around and feel as though they're shredding their shortboard, you're going to want a surfskate that caters to your size.

There's really no better way to compliment surf training than with a surfskate.

They're a solid little workout for the legs and great for cardio, the perfect addition to a surfing fitness training regime. And more importantly, it's truly the only way to practice your surfing skills when on land in a way that actually feels like you're surfing.

So why wouldn't you want to continuously improve your surfing while having a hell of a lot of fun while doing so? Because honestly, it's a pretty amazing feeling when the city streets become a wave park.

Surfer, skateboarder, or beginner to both/either alike, there's a surfskate out there waiting to show you just how good it feels to carve on these fish out of water.