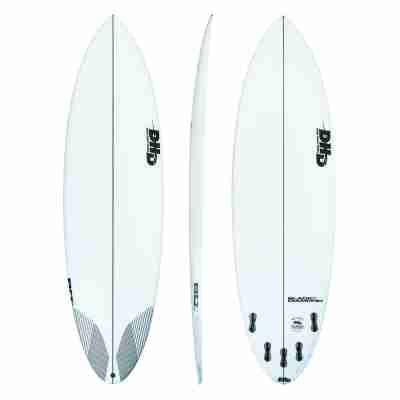 Browse all Black Diamond Surfboard reviews completed by the global Boardcave community. Gather unique surfboard model insights and feedback, while learning more about the DHD Black Diamond. Watch and read Black Diamond reviews from surfers with the same rider profile as you, filter results to a similar, weight, ability, fitness and volume to help you compare and buy your next board. Our unbiased reviews are used by shapers, surfers and the global surfing community to learn, advance and refine all round surfboard design.

Have been surfing 2 1/2 years and bought this after last having a slightly bigger fish. Still catches waves really easily even small stuff but takes steeper drops much better. Fast and good speed with lots of drive. I’ve really enjoyed it and it’s given me more confidence in slightly bigger faster waves. Really progressed my surfing.

My surfing has improved out of sight with this board .My Flow speed and turns feels so much better, it’s been a great addition to my Quiver.

Great small wave board, very skatey with lots of tail release when you want it. I didn’t like it as a quad. Some suggest going for a quad when it gets bigger but you’re not wanting to ride this board above head height anyway.

Real happy with the board. Paddles easy and is quite mobile when turning down the line. I’m a tall guy and would recommend it to others. It’s Definitely an all rounder, works in the 1ft to 5ft range. Worth the money.

First short board after a 10yr break from surfing and boy am I happy with my choice. This has been a great confidence builder and would recommend to anyone getting their first short board. Found it best in waist to chest high but still can have fun on chopped up shories if conditions are sub par.

Great all round board. Excellent volume under chest for paddling into waves. Low rocker provides speed but still very good manoeuvrability. Mainly use in 3-4 foot surf but was also brilliant in double overhead Indo. Was told this was a good alternative to the Hypto Krypto as a versatile board. That it has been!

First chance I got to surf my 5'11 BD was luckily pumping, hollow 3-5 foot shorebreak with rare bomb sets. First thing I noticed was the great paddle power. The volume under the chest makes this thing paddle like a log. You can get around a lineup or go to battle with a big current far more successfully than a normal shortboard of the same volume. Performance wise the board holds very well in forehand & backhand barrels. You can trust it on a late drop which is very important, it's stable and makes you feel in control of even solid unruley waves. Fell out of the sky into strong offshore wind 2 times on my first surf, on waves that I didn't really want to eat it on, but it connected on the way down superbly, and ended up making both drops. Much to the credit of the really well shaped pulled in rails & double concave at the tail. It's stable in critical takeoffs and forgiving / very under control when you're at speed. It lacks acceleration in smaller surf, it doesn't want to shoot out when you take off down the line or accelerate out of turns unless you've got a steep pocket, so it's not ideal for slop. But it's still "ridable" in any conditions 2-6 ft. Personally I think it's best in 3-5 ft average and better surf, making it super versatile and relevant most days. Not quite the one board quiver, but it'll still be my go to when it's 4ft, glassy, clean and steep. I've only ridden it with a couple of thruster setups so far but I am very exctited to try it as a quad. I think the shape will compliment 4 fins very well..

The Black Diamond is an excellent all-rounder. It has the right area and volume under the chest but not much in the tail, making it great to manoeuvre. It paddles exceptionally well and is fast off the front foot. This board is easy to ride, gets you lots of speed. It's a take-everwhere board. I had the chance to get my board directly shaped by Darren himself, so it makes that board even extra special for me. I love this board so much that I bought a second one in epoxy this time.

A great board that handles powerful sucky waves and mellower walls. extra volume gets you in nice and early and feels positive with plenty of drive into turns. A real confidence booster when things do start to get critical. If you cant get in as regular this board is a great paddler and very forgiving.

Bought this at 6’4” as my first “short board” after learning on a 7’6” mini mal. Great first board to size down on. Paddles well but still feels more like a shortboard compared to the mini mal