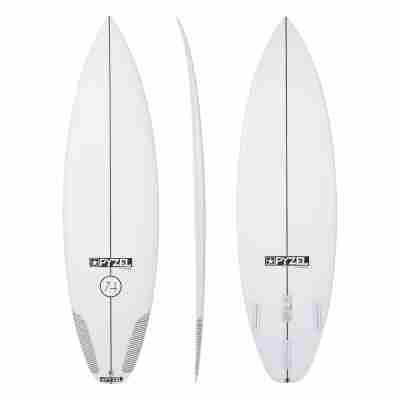 Browse all 74 Surfboard reviews completed by the global Boardcave community. Gather unique surfboard model insights and feedback, while learning more about the Pyzel 74. Watch and read 74 reviews from surfers with the same rider profile as you, filter results to a similar, weight, ability, fitness and volume to help you compare and buy your next board. Our unbiased reviews are used by shapers, surfers and the global surfing community to learn, advance and refine all round surfboard design.

Tried this as a demo not long after it was released fas the “Stab in the Dark” winner with Dane Reynolds. First surf was in average beach break waves. Had JJF futures fins in but remember getting out thinking it wasn’t the best board, felt slow and sluggish and struggled to get it going. Turned well in more upright waves and held its tail well however. Not to be defeated I tried a different set of fins Dane Reynolds Captain Fin co in similar conditions later that day and it was a totally different board (maybe the fins? Maybe me?) plenty of speed off the mark and wherever I wanted the board to go it would. Held rail through turns released off the top nicely. The next few surfs on it were exactly the same. A great board in bothe beach real and point waves