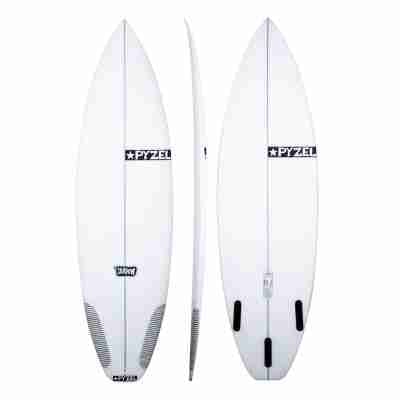 "You're reviewing The Shadow

Browse all The Shadow Surfboard reviews completed by the global Boardcave community. Gather unique surfboard model insights and feedback, while learning more about the Pyzel The Shadow. Watch and read The Shadow reviews from surfers with the same rider profile as you, filter results to a similar, weight, ability, fitness and volume to help you compare and buy your next board. Our unbiased reviews are used by shapers, surfers and the global surfing community to learn, advance and refine all round surfboard design.

This board is a great looking and amazing board to ride aswell as another friend of mine has this board it has great drive speed and amazing mobility. If your interested in this board I recommend you buy it

'The board was all around really good it would go wherever you wanted it to.

Such a good board! Carries speed like no other and works so well in the pocket, so nice on rail on a good open face, holds perfectly. 10/10 would recommend.

Best go to short board. Fast and easy to surf in average surf yet still has plenty of drive and hold to handle bigger waves.

So my initial thoughts were “this doesn’t feel similar to other high performance boards”. The reason being is how flat the deck is. It really felt different to me. Other things that stood out were a fairly serious amount of concave on the last foot or so of the nose. When I went surfing this definitely made sense straight away. I felt really planted on the board due to the flat deck. It helped my balance actually. I went on the lower side of my volume range but it felt really solid. Paddled into waves easily as well! I was after a higher performance version of the phantom and that’s exactly what I got. I really do love this board! It pivots well but can still hold a rail in big surf. Im stoked and highly recommend this board. If your looking at one I’d say it definitely isn’t a bad option what so ever :)

Second pyzel I’ve surfed, gains speed super Quick and cuts through the water nicely, very manoeuvrable board that could be used by any intermediate and above surfer, caught some absolutely killer waves with this board and only surfed it 4 times!!

Easy to surf, great on the points and awesome on the beaches especially when is 3 to 5 foot.

Lucky SHADOW! I managed by chance to get this board off a mate, who bought it for himself but felt it was a little too low in volume after all, lucky me. For a 28L board with a much more generous nose outline and volume filling the front of the deck than a more even keel throughout, you'd be forgiven for thinking this thing would move like a boat. Fast, smooth on rail and forgiving across flatter sections of the wave face. I've surfed this thing in the chop and cleaner conditions in WA and The Shadow performs like no board I have ever ridden. At first it was a bit odd, feeling so much of the board under your front foot but I got used to it really quickly and soon realised how good it was. The wider outline and sneaky positioning of volume under the chest/foot definitely helped me paddle and get up onto the waves with ease, especially on some of the larger or steeper sets having that volume there just allows you to slot in tight on the rail down the face and recover. There is a tiny little hip in the tail and coupled with a slightly tighter squash tail allows for a good bit of surfing off the back foot when you wish to release, whether that's on the face or off the lip. I wouldn't say there is a negative, just getting used to the volume placement was an adjustment from riding boards with a more even or traditional spread. As far as I am concerned this is one of the best boards I have ever ridden, if not the best. In clean or chop it performs to it's peak, it's forgiving and to be frank I think it's helped my surfing a great deal. There's also a note that all stock orders come with a 5x4 team glassing and I have a mate who said he really felt a difference with heavier glass on a Chilli Faded (6x4oz) but I have not noticed anything when in the water. Pound for pound when you hold two different glassed boards, yeah there is a mild and noticeable difference in the weight but when you're in the sea, doesn't cross your mind. I ride the stock dimensions and use the Octopus Is Real traction. Yew!