Where do Waves Come From

A Basic Understanding of Where Waves Come From

If you’ve been surfing for a while, or just curious about waves in general, you may be asking yourself “where do waves come from?”. 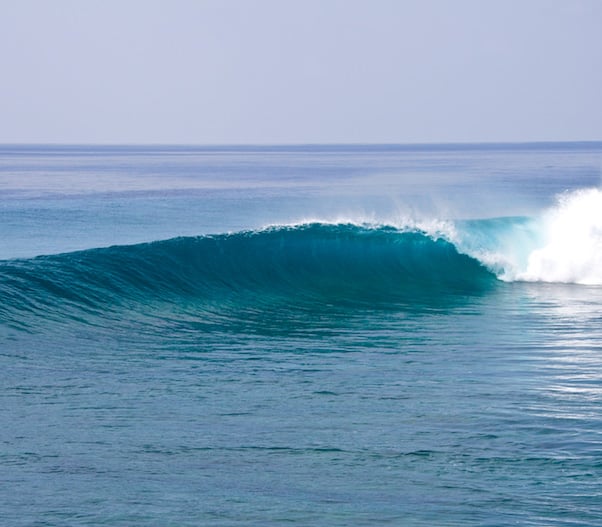 Dreaming of that perfect setup, but where do those waves come from?.

Some of us only have certain windows in which we can get out for a surf, so we may go out no matter the quality or size of the waves. Others may have the luxury to wait for the ideal time each day to paddle out. Either way, it is good to know the basics of where waves come from, how they form and it helps to know what boards to have on hand for any given scenario.

Where Waves Come From

Basically, waves are generated by wind. Offshore storms far out to sea generate wind which blows across the surface of the water. As it continues to blow, ripples begin to form on the surface. The more the wind continues to blow, the easier it is for the ripples to catch and grow in size.

The beginning of your waves, it all starts with wind.

On whether maps, the wind is shown in the form of a Low Pressure System. The more tightly compacted the isobars around the low pressure system, the stronger the wind. The initial waves created will be moving in the same direction that the wind is blowing. The longer and stronger that wind blows, the bigger these wave become as the wind can grab a hold of these waves easier than the flat surface of the water. As they increase in size, the waves will carry more energy across the surface of the water.

The size of the waves however is limited to the strength and speed of the wind initially. Winds of a certain speed can only generate waves of a certain size. Once these waves are at their peak in size, the are considered “fully formed”. The waves closer to the system may seem jumbled up and in a bit of a state of chaos, but as these “fully formed” waves move further and further away from the system, they begin to organize themselves into steady lines of swell.

Some of these waves will have different speeds and wave periods. The longer period swells move faster and carry more energy than the slower period swells. These will continue to move forward until they are either disrupted by a mass of some sort (i.e. and island chain, reef or beach) or just until the travel so far that they run out of they own energy. 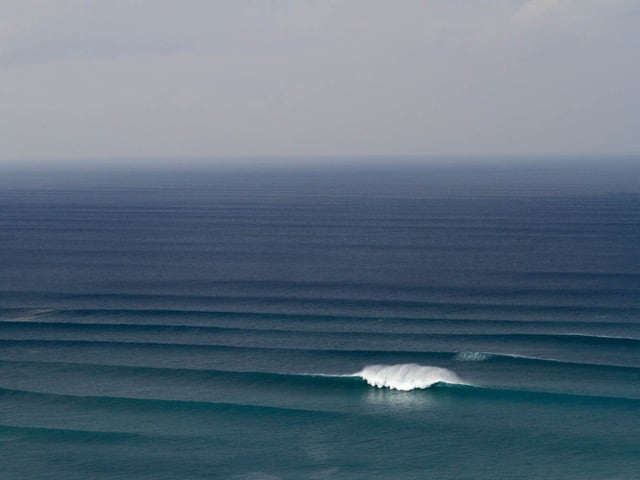 The waves that are still moving forward but are no longer affected by the wind are considered Ground Swell. This ground swell is really what we, as surfers, are looking for as they are more organized and you can generally predict the “sets” approaching to some degree.

How Waves Get Their Shape

Ok, now that you have a brief idea of where the waves are coming from, lets dive into how waves get their shape.

Lets consider a nice ground swell. So as these low pressure systems spin off the coast generating swell, the minute the swell is "fully formed" or no longer affected by the wind itself, it slowly starts to lose it’s energy as it travels across the open water. Unless it hits an object of some sort first, like an island chain, reef, beach, etc.

As that energy traveling from deep water comes into contact with the shallows of an island, reef or beach, the waves will feel this bottom and begin to steepen until it comes to a point (crest) where it will topple over. 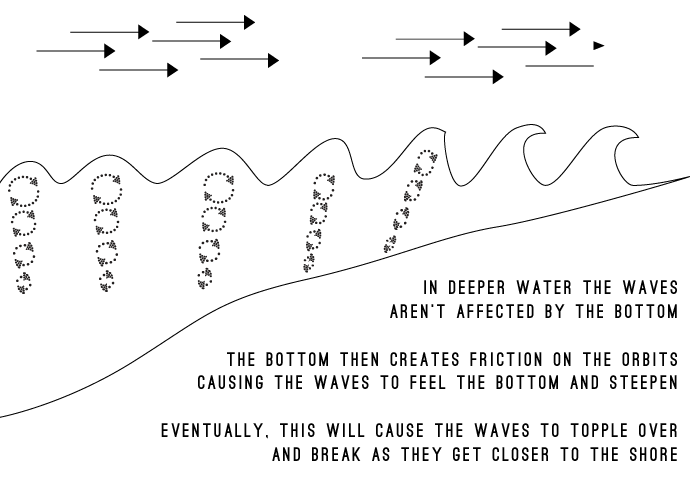 If those waves are traveling across the bottom of a sloping beach break, gradually rising, the waves break a little softer as opposed to if they come straight from deep water and hit a “shelf” like a reef or rocks. These waves will be what are considered more like a slab. They are usually much heavier than waves breaking up a sloping beach. Even the smaller waves can have more power than a bigger sloping beach break. 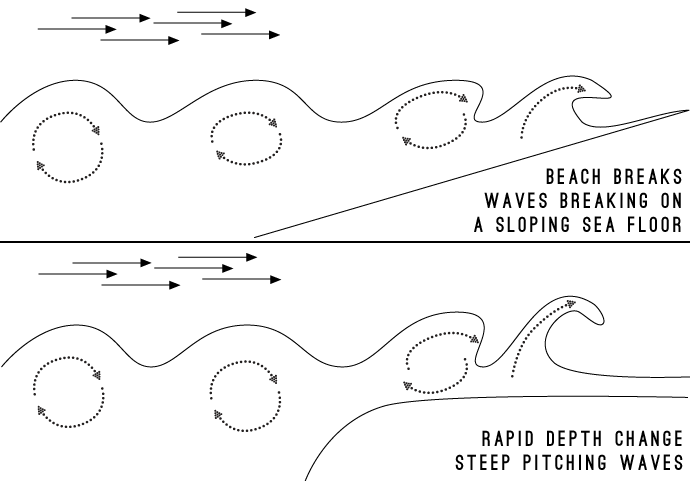 The difference between waves coming up a sloping beach or hitting a steeper shelf.

When you combine the various degrees of wave strength and speed with the varying types of shallows it can hit, you can have waves forming anywhere from ankle high to 60 or even 100 feet...really the height of a breaking wave can be limitless, it all depends on the source.

Now, if the swell is hitting the reef, beach, etc straight on, the shape of the waves for surfing is not going to be too great. This is what we call a closeout, or walled up. To have a surfable wave, you want it to have somewhat of a shoulder, which requires the waves to break at an angle to whatever mass it is hitting.

With beach breaks, you want to look for where the sand bars might be and if the angle is right for the swell hitting that sand bar, you are looking good. Reefs don’t move, so they are generally fairly predictable given a particular angled swell, as are point breaks, only they usually offer a longer ridable wave as the swell hits the tip of the point first and the energy is allowed to run along side the bottom for quite a while. 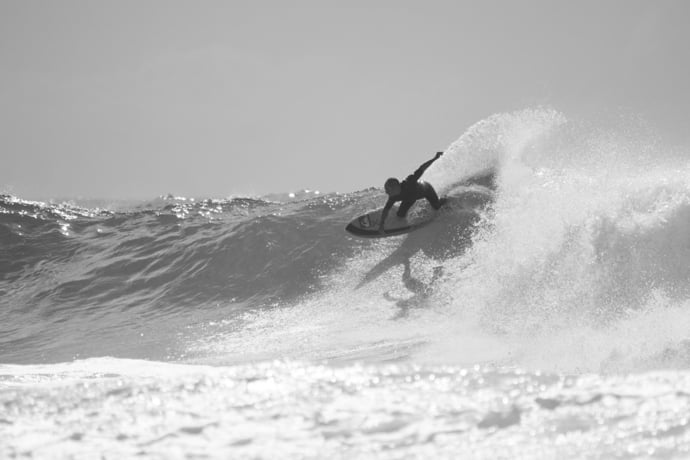 Tom Carroll has been at this game for a while, he knows what the surf is doing at all times and what board to choose. Here he is picking up his Cali Quad by Eye Symmetry and making the most out of some good surf.

This is obviously a basic description of where waves come from and how they are affected once they hit your shores. There are so many other factors involved that we have yet to touch on, such as local winds and the tidal effects at any given time. The same swell with a high tide onshore wind flow is going to be a lot different than if it was low tide and offshore. So much so that it can mean the difference between fat, sloppy waves or hollow perfect barrels.

So, take this info with a grain of salt and use it more as a reference in the back of your mind. Of course, if you are the unlucky bunch like most of us who only have certain times of the day you can get out, just go for it. But if you have the time and the knowledge, you can make sure you score the best part of every swell no matter what the day or conditions. 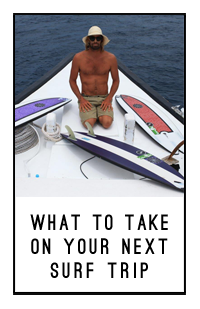 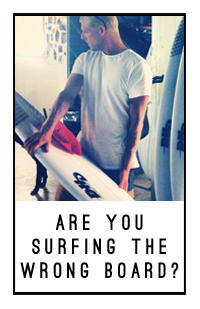 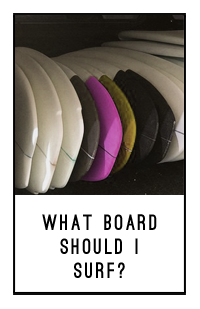