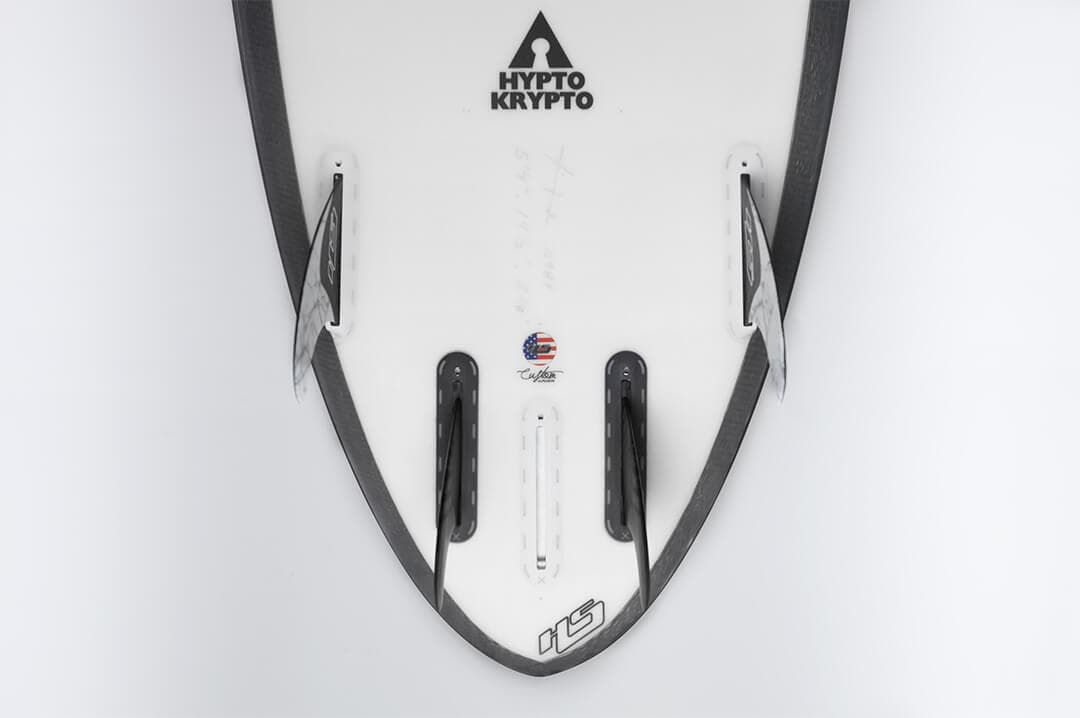 Thruster Vs Quad Fin, What to Ride and When

With a good majority of surfboards coming in the 5 fin convertible option, the question we often get is “which is better, the thruster or the quad?”. Unfortunately, there is no simple answer to this questions...simply put, both are great, it all depends on what you need out of them.

This is the main reason why there are many new five fin surfboards getting shaped.

Your Surfboard Fins play a big role in your boards performance. Out of our experience, we would say that almost 40% of your board's performance is due to your fins. The point is, that switching out your fins or fin configuration plays a BIG role in how your board is going to want to be surfed. 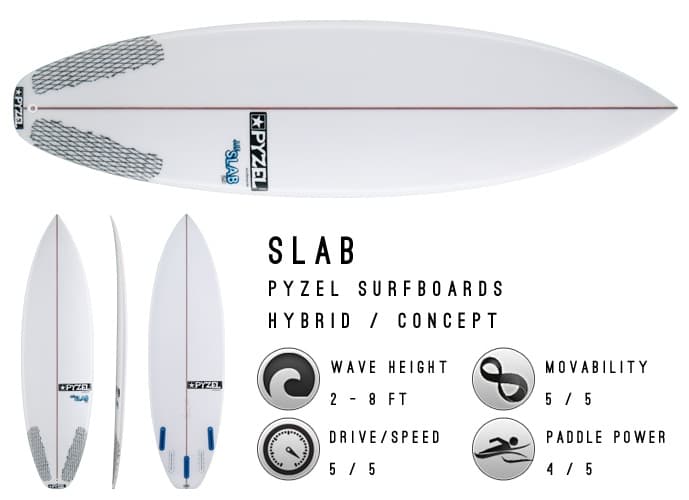 The Slab by Pyzel Surfboards giving you the option for speed and hold or top to bottom shredding.

The matter really goes beyond the simple quad or thruster question. Where your fins are placed in either configuration plays a role as well, which we will touch on throughout the article.

The Single Fin came about to help give big heavy boards some traction and stability. The became refined over time to help produce drive while providing hold. Twin fins came into play to help loosen boards up, giving manoeuvrability as well as added drive.

Simon Anderson developed the thruster to give him an advantage over the twin fin design as he was a bigger, heavier footed surfer. This may have resulted in a lack of down the line speed compared the the twin fin, but gave him the added element of control while pushing through turns. Keeping him from sliding his board out. Through experimentation, he was able to find a good balance of drive and speed with control.

The quad fin pretty much blends attributes of the twin fin and the thruster. That added down-the-line speed without the resistance/drag of the centre fin in a thruster, but with more hold and controlled manoeuvrability than the twin.

The trick with quads though, is the placement of the cluster of fins.

If we take the rears fins into consideration, the closer they are together, and the further they are back, the more your board is going to surf similar to a thruster. The farther apart they are and/or placed higher up near the front fins, the faster down the line they will be like a twin. 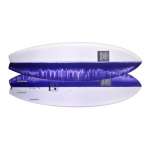 The Cali Quad by Eye Symmetry Surfboards gives you a little extra performance with the rear fins set a touch closer together.

So why or when to even consider the Quad as an option?

You may be thinking to yourself, why even have the quad option? Well, simply put, the quad fills that void where the thruster or the twin fall through. Everyone wants that fast but loose feeling, while maintaining control when surfing. That is exactly where the quad comes into play. And they can be put to use in either big heavy hollow waves, or small mushy gutless waves…depending on the cluster placement.

On smaller gutless days, having a quad with the rear fins closer to the rail and slightly further up, will really loosen the board up for you. This allows for quick manoeuvres and sliding the tail around as you need with ease. It also gives you that much more speed through the flats as there is no resistance of a trailing centre fin.

For the bigger, hollow days, the quads with rears place back a little and also close to the rail will provide extra speed and hold in the face of the wave. You can take higher lines on steeper waves with the extra hold of having two fins on the rail. Plus that extra speed, again due to no center fin drag, comes in handy on those fright train barreling waves where there is not much room to turn anyways.

To top that off, they are a touch quicker out of the gate compared to your thruster. As soon as you take off and get to your feet, quads will provide you instant down the line speed instead of having to pump and drive your board.

Those were just a couple of examples from one end of the spectrum to the other...changing the fin placement around will adjust how the board wants to be surfed. If you were to bring the rear fins closer together, they are going to begin to act more like a pivot point, similar to a center fin in a thruster set. So thinking about the particular board you are ordering and how you want the fins can be crucial. However you shaper has more than likely already thought about this and it set them accordingly.

The Rock Up by Lost Surfboards rocking the 5 fin option. This board is for good waves with decent size. Fast and hollow or ultra rippable, you choose.

So Why Even Consider a Thruster?

There is a good reason why the Thruster Fin set up has been and still remains the go-to for surfboards over the last 30 years. Simply put, they are predictable, and they work. But if quads are so functional, you might be asking why even consider the thruster anymore? 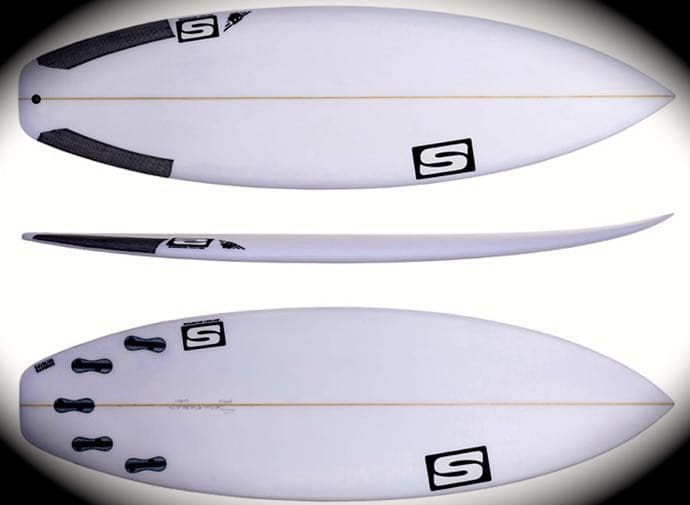 Even the father of the thruster, Simon Anderson is willing to give you the option to go quad, like on this DTS model.

Well, the thruster is perfect for those super ripple days. Where the quad is great in either small waves, or hollow days that are down the line, the thruster gets you what you want when you have time to perform instead of trying to glide past sections or make it down the line with speed.

They give you a controlled drag that comes in useful when wanting to surf at a higher level on good quality waves. And by good quality (for the purpose of this article) we mean waves that are not too fast, not too small or weak, just simply rippable. Think of those shoulder to slightly over head days that are top to bottom, but with lots of room to move around and get in lots of good turns.

Thrusters will still work in small waves, and big waves for that matter too, but it all comes down to the choice of of Surfboard Fins that are ridden in the board, and what the surfer prefers. You see some big wave surfers going quad for that extra speed and ability to hold a high line. Some guys however prefer the extra stability and control needed that the thruster can give you.

What Should You Get For Your Board?

Well, if you can, go with the 5 fin option. Why not have the opportunity to change out your fin set up if you can. That is what surfing is all about after all, experimentation. Having extra fin boxes not in use under your board is not going to make a noticeable difference in terms of the drag or confusion of the water flowing through the bottom. So if you can, why not?

However, some shapers have designed certain models to work in conjunction with ether a thruster or quad set up but not both. This is rare, but it does happen. Even still, if they will allow you the option to go 5 fin anyways - so do it.

Take a look at the Hypto Krypto for example. Hayden Cox designed that board originally to work specifically as a thruster. The shape and bottom contours of the board are supposed to give you enough speed that going quad was not needed. But, by popular demand they recently release the 5 fin Hypto Krypto option so surfers could experiment. It wasn’t as simple as just dropping in a couple of extra boxes though. Hayden really had to think about the fin placements of both designs and take that into consideration to how they each can be situated while utilising the same front fin boxes.

The Hypto Krypto in all it's 5 fin glory.

So, in a nutshell, if you can get the 5 fin option, go for it. You are not losing out on anything, only gaining. You never know until you try.

Make sure you check out the Board Engine to find a range of boards all made in Australia by professional shapers at the top of their crafts.

FIND YOUR PERFECT BOARD


Have a different question?