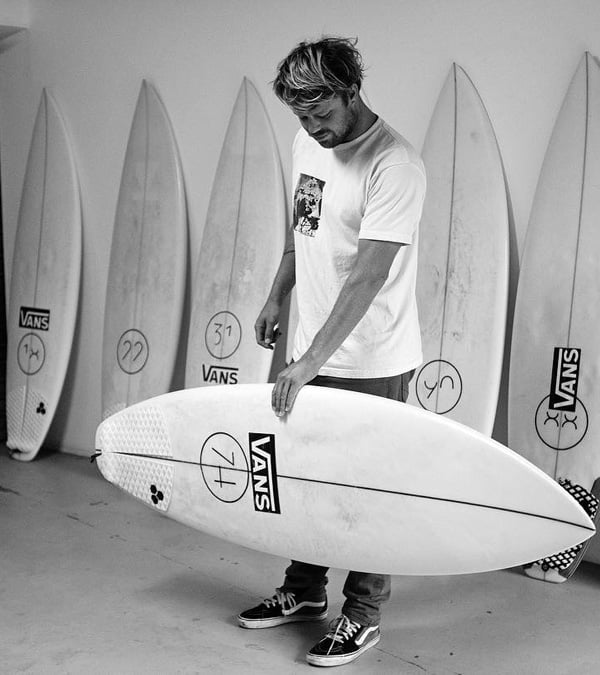 Dane Reynolds deciding on the eventual winner of 2016 Stab in the Dark contest, #74 by Pyzel Surfboards.

Following last year’s success of the 'Stab in the Dark' competition featuring Julian Wilson, the team over at Stab decided to follow up on the contest. In partnership with Swell and Corona Extra, Stab flew former WCT surfer Dayne Reynolds aka 'Seal Tooth' out 40 hours from Los Angeles to South Africa’s Johannesburg for one mission: to find the best surfboard or shaper in the world.

And note: These surfboards will not give you the ability to surf like Dane.

With a time limit of 10 days set in June, Dane was the perfect candidate to test his ‘go for broke style’ out on top of the line, high performance surfboards. Using an unbiased system – no name, dimensions and markings. By surfing at least twice on 13 different surfboards (in comparison to 11 last year) helped him make the decision. Narrowing down his selection from 13 to four, Dane finally selected #74 shaped by Pyzel Surfboards (who shapes JJF’s boards) as his number one pick.

"I’m kind of saving this wave for good waves because it looks good. It kind of looks like a low rocker looks like it should be pretty drivey and hopefully good for today."

"I kind of went through and rode the ones I was digging the last few and rode them later when it (surf) was better." he said.

Dane noted on his sheet that the board was best suited for 5ft tubes and cutbacks.

"#74 and #31 (JS) are more drivey, down the line, point break boards, but both of them have really good qualities that I really like surfing. If I were going to go surf right now, fun waves, I would be the most excited to surf this (Pyzel), so I’m going to deem it the winner."

More information about the 2016 Stab in The Dark board models to coming soon so watch this space...

For now, check out some of the other brands that competed in the competition below.